I haven't been posting much crochet lately due in part that our nephew came to visit for summer vacation. We did a lot of fishing and stuff the hubby and i normally don't do. I like fishing, but it's not hubbys favorite thing. Now i have to find a new fishing buddy.

One of the spots we went fishing was the Eau Gallie River. There for the first time since i moved to Florida, i saw Manatees. There was a group of about eight  swimming right near us. Naturally we had to find a new spot to fish.


Here's a picture i took of one of them. It was huge. I would guess this one was probably 6 feet long and could have pushed 800 pounds if not more. Gentle giants.
Sadly the Eau Gallie River is in pretty bad shape and has to be dredged (muck removed from the bottom of the river) It's been referred to as "Black Mayonnaise" . Where to put it is another story as it will smell pretty bad. The talk was to put it in our dump, but still debating.  From my understanding the muck was created by chemicals used in lawn care. The rainwater runoff brought it to the river. This and other things like rotting plants, algae etc. Either way, it's bad.

Other than that, i didn't catch anything. My nephew caught some little spotted trout (i think that's what is was) We would just release as i wouldn't eat anything from the river as it is now. Anyway, it was nice. 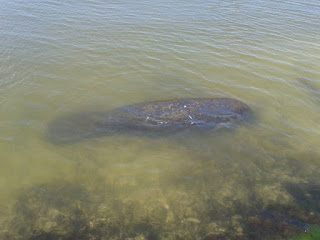