I Hope I Didn't Make a Mistake

After the death of my dogs and my dog Nikki with cancer, i said i wouldn't get any more dogs. So what did i end up getting, A pig. I really should have been Dr Doolittle.
I adopted a mini potbelly pig. I named her Porkchop. She's just under 1 yr old and weighs about 20 pounds. I found her through Craigslist.(actually hubby did and made the mistake telling me about it) A family just moved from Tennessee and couldn't keep her. They tell me she's full grown. My dog Nikki isn't too happy about her, but basically keeps her distance. Porkchop made a couple aggressive moves at her and showed her teeth. The former owner had told me she does this with his dogs also, but doesn't bite. I saw his two dogs there when i went to pick up Porkchop, and they where all getting along. The one thing the guy told me is he had been feeding her cornflakes ,Cheerios and dog food. I looked up what a pig eats and it says not to feed it dog food, so i'll have to go and get some pig pellets for her. I really don't know what care a pig needs, but i will also call my local vet. I want to know if it needs hoof care etc. So anyway, well just see how it goes.The guy gave her to me for free. I hope it wasn't because she's too much trouble. She's peed a couple of times on my floor, but he said they had a doggy door for her and she used to go out on her own. I have my door open that goes out to and enclosed porch. I hope she catches on. They said pigs can be trained and are smart. I figured if she does become too much for me to handle as far as getting along with my other animals, i won't have any trouble finding her a new home as they got a lot of calls about her, but i was first to get her. 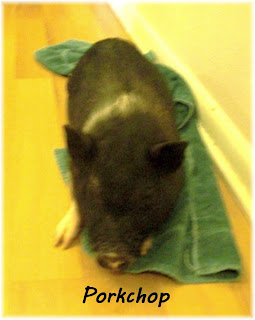