Vintage Craft Supplies & A New Member of The Family

I have made a lot of progress going through my craft supplies. An elderly friend of mine (in her 90's) gave me a bunch of craft supplies years ago. Will all good intentions of making something with them someday, i stored them away. I did make a few things, but i know i just won't get around to it. Besides i need the room money.Things are a bit tough so i'm just doing what i can. There's a bunch more things going on, but that's a whole other book...

Anyway, i started listing them in my Etsy shop. There's a bunch of great supplies (mostly doll making) They date anywhere from the 60's up to the 80's. She used to crochet and make all sorts of dolls etc.

On a different subject, i forgot to mention i rescued yet another animal. Now a Cockatiel. I found him in the bushes outside of a restaurant. He was stuck in the ground cover. At first we thought it was a pigeon, but then i saw his head. Hubby grabbed him for me and we got a box from inside the restaurant.   I still can't believe how animals seem to find me. This was just a few weeks after my other bird had died at 13 yrs. Another bird i rescued from my pool as a half-bald baby that i hand raised. I was heartbroken.

So what's the chances? Here i had just finished cleaning out the bird cage and even had listed it for sale when i found this guy. I did check the lost/found pets and nothing was listed. So here's the newest member, my redneck cockatiel Cletus. I think he had injured his wing as he seemed like he was holding it a bit crooked, but was good in a couple of days. The poor guy pigged out when i put food and water in the cage with him. I wonder how long he was out on his own. He's lucky a hawk didn't find him or that he didn't end up on the road just a few feet away.
I want to get him a bigger cage since this isn't really big enough for him, but will do for now.
I ask him if he wants "Scratchy-Scratchy", and he comes over to the front of the cage and lets me reach in and scratch his head, but only me. He runs away from everyone else. He will let my son feed him a cracker through the cage, but that's as close as he can get. I'm trying to teach him to talk. I'm guessing he's not very old. The males have the dark cheeks. He's noisy when he wants to be.
His wings aren't clipped, so i would like to bring him to a vet to get that done. It scares me to even try. Once that's done i want to let him hang outside of his cage. I think maybe he will get friendlier that way too.

So anyway, if you would like to see the newest listings in my shop, here's the link DebbieCrochets 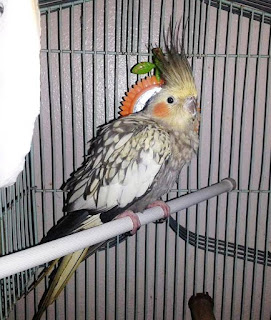