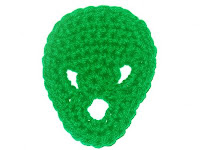 Note: you can probably do the pattern in crochet thread with a smaller hook like # 7, but I have not tested it.

If you would like to turn this into a little mask, go around edge again in sc until desired "bowl effect " is reached. Tie a piece of yarn to each side (near top of each eye)

*For best results, it is recommended to work pattern exactly as written. instructions have been checked for accuracy; however I am not responsible for typographical error, differences in individual interpretation or other variances.
Posted by Debs Crochet at Sunday, May 24, 2009